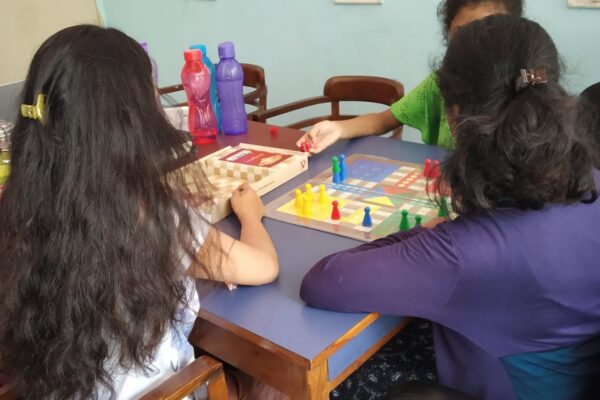 Rehabilitation and Restoration for Holistic well being

Nirmal Bhavan is a residential rehabilitation facility girls and women who have left the red light area ( RLA)  voluntarily as well as for girls and women living in “at risk” situation in the community. They have nowhere to go and a facility such as this provides safety and hope. This project is an extension of the outreach project in Grant road RLA which was started in 1998.

This was initially started as a Half Way Home on 1st May 2001 in a rental property in response to the needs of the women who having decided to leave the RLA desperately needed holistic support. Women who came then were mostly unwell and were sero positive.

In 2008 December the project was shifted to Oasis India’s own Property.

It is a combination of two bungalows having ground floor, first floor and a terrace having an area of 1960 sq ft. The ground floor has a lounge, education room, training room and counselling room and project office space and also small space for Mumbai Admin office and two washrooms. The first floor has two bedrooms, and two washrooms, dining space and kitchen. The dining space doubles up for small events as well. There is plenty of open space in the front yard and a big garden space on the side.

From 1999 to 2007, the facility was used as a training centre for boys rescued from the streets and ran training in tailoring, papier Mache, screen printing, electrical works etc.

In 2007 – 2008 the property was renovated with an infrastructure that had had separate space for residence and separate for education and training with an emphasis in Counselling and was called the Model After Care Home (MAH). The set up was done in collaboration with IJM.

The MAH was meant to special rehab facility for women and girls referred by the two government homes where Oasis India was working with women and girls from background of trafficking and sexual exploitation. (Priceless project from 2007- 2013)

The plan was to run Half Way Home and MAH separately. However, the two were merged and continues to function in that format to date and is called Nirmal Bhavan- House of Purity.

Having been in existence for past 20 years, the project has housed over a 230 women who have not just received shelter but have moved on from a life of brokenness to wholeness.

The programme ensures “that women and girls from backgrounds of commercial sexual exploitation or trafficking gain a level of healing, as well as social, personal, emotional and work related skills that enable them to take up employment of their choice and to be able to live within community.”

Life at NB provides an experience that helps the women thrive and make choices under guidance of the counsellor and trainers. They get some space for themselves, timely meals, facility for hygiene, timely medical consultation and health care, friendships with people who genuinely care about them and an opportunity to reflect and make choices for the future rather than just being told.

The Learning and Livelihoods programme is set up to help the women to rediscover their own value and potential through Personal Development Course. This is an integrated course involving personal development skills, cognitive and creative skills, basic education, health awareness and counselling sessions.  Alongside they also learn Hindi Literacy and for those who are interested, even spoken and basic written English so that they can eventually move into independent living and lead stable lives.

The extension of Nirmal Bhavan is a Group Home where women who have been placed in job live in shared accommodation and are responsible for themselves in every way. They contribute towards the rent, other utility bills and eventually are established in the context of a normal society.