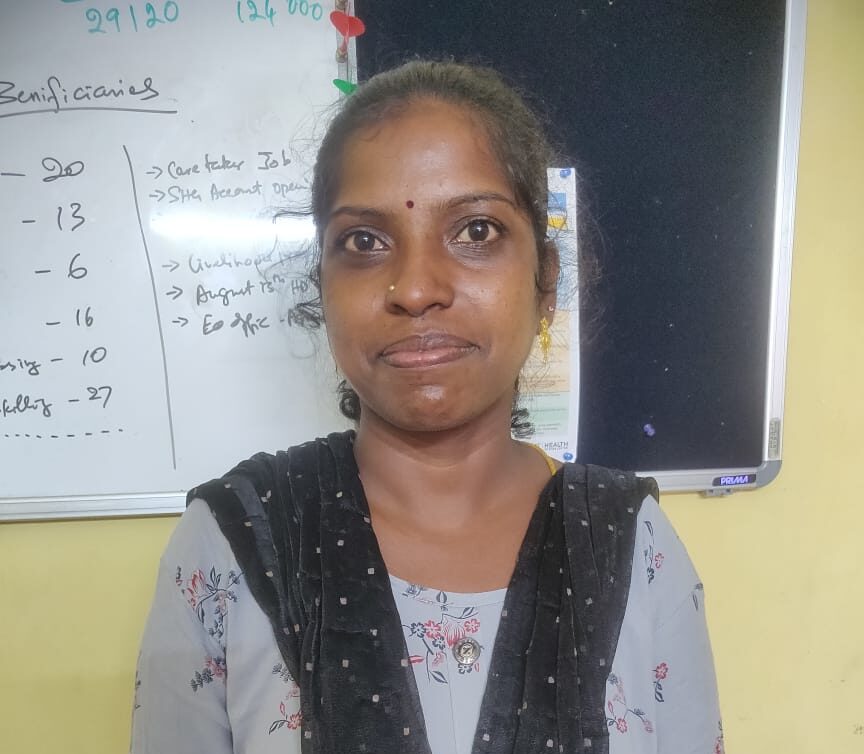 Rekha joined our vocational tailoring class at Kannagi Nagar and picked up the skill quite easily. Her enthusiasm and commitment made her a hit amongst her neighbours as she started taking orders soon. Rekha and her husband opened asmall tea shop but it not take off and that took a toll on them financially. Her husbandstarted driving auto rickshaw for a living and Rekha started a tailoring unit at home.During the lockdown, she worked for hours, so that she would have enough money to run the family. Rekha says, “My husband is my biggest strength and support.”

Rekha joined our self–help group to begin saving money. She also became an office bearer and coordinated among the women in her group. Rekha took the responsibility during the pandemic to gather her team members and collect the money for the savings, despite everyone having financial crisis of their own. Rekha says, “I have not taken any loans yet. As a group, we felt that some needed the money more. I wanted to take a loan for my expenses during the Diwali festival but one of our SHG member’s husband had a heart attack and was hospitalised. So we all decided to let her take the loan. Many others have taken loans when they struggled with paying their childrens’ school fees or for other sudden expenses.”

Rekha and the members of the SHG in Kannagi Nagar have a strong community that supports each other through their ups and downs. A much needed support system.