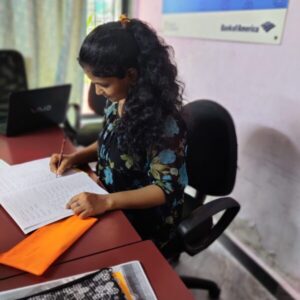 Keerthi* was just 16 when her parents decided to marry her off to their relative. She was young and could not cope with the daily chores of getting up at 4 am for housework. Her husband physically abused her to the point where she ran back to her parents’ house. She silently suffered as people mocked and taunted her in the village for leaving her abusive husband.

A well-wisher often visited Keerthi and her parents. She always spoke to Keerthi of her struggles and promised her that everything will be ok. One day, she asked Keerthi if she would like to come with her to Mumbai and get a good job. Keerthi knew that this was her way out of this silent suffering. She agreed and they went toMumbai to start her new life. Little did she know that this woman was a brothel keeper and has brought her here for commercial sex work. Vunerability and those in dysfunctional families are always targeted by the perpetrators.

Keerthi was locked in a room in a brothel for a week and was asked to attend customers. She felt betrayed, lost and hopeless in a place where she knew nothing or no one. Fighting back did not do her any good. She had no choice but to accept her fate. Keerthi did not reveal this to her parents as she knew she would be subjected to more judgement and shame. She always told her parents that she had a nice job in the city and a good salary but the reality pricked her heart deep.

On one of her visits to the village, she met Amal*. They fell in love, got married and had two beautiful children. Keerthi was betrayed yet again when she found out that Amal was already married. She moved back to the red-light area. This was when she met our change agent Madhavi who helped her get to the other side of the dark tunnel. Madhavi helped Keerthi send her daughter and son to safe shelter homes and introduced her to Oasis India. Our staff helped Keerthi move into our rehabilition home, Nirmal Bhavan where she gets counselling and skill development training.

From a life filled with abuse, betrayal and pain, Keerthi now has a new beginning.

Previous reading
Jasmine’s Story
Next reading
A Time For Hope