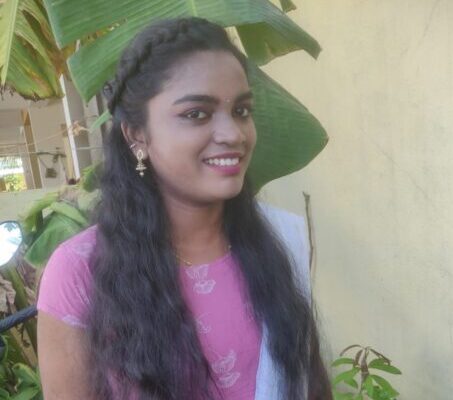 Kamali, 21, lives in Kannaginagar with her family. She joined the hairdressing programme at a crucial time in her life, when there were no job opportunities due to the pandemic. During the course of the programme, we got to understand Kamali and her resilient personality.

Kamali had a difficult childhood. Her father was an alcoholic. She lost him to the addiction when she was just 16. Her mother is a domestic worker who runs the family with an earning of just Rs.10,000 per month ($134 | £98). Though struggles at home hovered over her mind, her dreams of becoming a lawyer inspired her of a better future.

Kamali decided to study law after her undergrad but her family was deep in need of money. Kamali knew she had leave her dreams behind and start working soon. A crushing reality stood in front of her. She had to help.

She began tutoring at a non-profit in Kannagi Nagar and was able to earn a little to provide for her mother. But that was not enough to keep the family going. Kamali was unable to take up job at corporates as she did not have a laptop. Young people in the slum communities are often unable to pursue their career due to the lack of resources even when opportunities present itself.

When Kamali was wondering what to do, one of her friends introduced her to the hairdressing programme at Oasis India. Although she was not interested in grooming, in desperate need for help, she decided to give it a shot anyway. Kamali says, “I never liked grooming and never gave any importance to it myself. When I started training at Oasis India, I developed a keen interest and began practicing grooming. The more I learn about it, the more exciting it was!

When Kamali initially joined the programme, her hesitancy and lack of interest was obvious for our trainers. However, over the course of six months, we witnessed a great change in her behaviour and attentiveness. Kamali is one of the trainees with a high attendance score in the course and is always willing to learn despite the challenges.

Our team says, “We had a four day exposure training at Natural Salons around the city where the trainees were sent in pairs to learn from first-hand experience.  During the first week, a trainee was hesitant to do the visit alone as she did not have a partner. When we discussed this with the other trainees, Kamali was the first one to volunteer to go alone. We appreciate her braveness and her desire to learn no matter what.”

Kamali says, “The exposure visit gave me a new perspective and a deeper understanding about this field. Initially, I wanted to take up any job to help my mother but now, I know that I need to get develop myself in this field and be the best in it. So I am looking forward to graduating from the hairdressing course and starting my career as a beautician.”