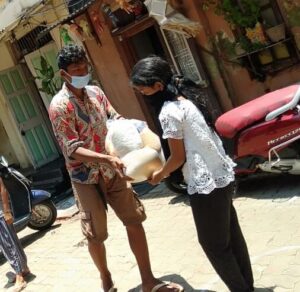 According to the International Labour Organisation, there are around 12.9 million Indian children engaged in work between the ages of 7 to 17. When children are employed or doing unpaid work, they are less likely to attend school, trapping them in the cycle of poverty. Like millions of those children, Sameer always dreamed of going to school, instead he was forced into child labour by his uncle. At just 10, he started working alongside his uncle to support his family and started taking care of his siblings. He was exposed to tobacco and became addicted to it.

One day, Sameer was rescued by an organisation and moved into our night shelter in Kamathipura when he turned 17. He is also part of the after-school programme and the football team. During the lockdown in India, when all our programmes were shut down, our staff were unable to reach out to the community people. Change agents like Sameer were of great help. He helped the Kamathipura staff distribute ration kits to the children and the mothers in the red-light area.