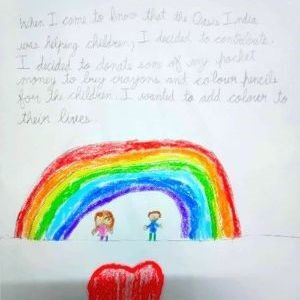 In the words of an 8-year-old who donated Rs.90 from her piggy bank to give stationary kits for children in the Nalasopara slum, giving is adding colour to someone’s life. Joanna says, “When I came to know that the Oasis India was helping children, I decided to contribute. I decided to donate some of my pocket money to buy crayons and colour pencils for the children. I wanted to add colour to their lives.”

Why should we give?

A research conducted by social psychologist Liz Dunn and her colleagues appeared in the journal ‘Science’ and they had surveyed over 600 U.S citizens on the concept of giving and happiness. They found that across all income groups, those who spent money on others experienced greater happiness than the ones that spent on themselves. In another setting, they gave the students of  the University of British Columbia, an envelope with money and asked them to spend that money on themselves or on others before 5 pm. Those that gifted others reported that they were much happier than those that spent money on themselves.

Giving makes you and those around you happy. When we give in whatever way possible through donation, volunteering etc, we are creating a difference in the life of someone who needs that help. This brings a great sense of fulfilment. The first week of October of every year is celebrated as the Joy Of Giving Week around the world, encouraging everyone to relish the happiness of giving. We have put together a few initiatives that you can give to today! Click here to see our Joy Of Giving initiatives.