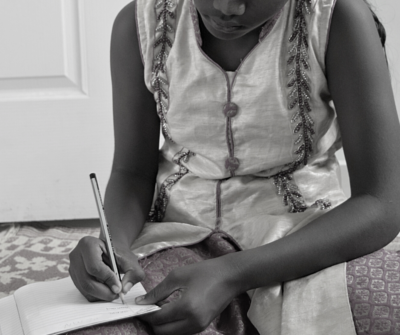 Home is our safe space. What if you do not feel safe in your own home? This was the reality for Kanaga* in Bangalore.

Our staff have been following up with children and women in the communities that we have conducted relief work with in the past year. One such family is Kanaga’s. She lived with her father and sister. During the pandemic last year, the children were staying at a hostel but were sent back to stay at home and the father struggled to keep the family afloat. To help him financially, the sisters also went to work at a factory with their father.

At work, Kanaga’s father was approached by a co-worker with a chance to sell their daughter to a couple for 15 Lakhs, promising a good life for himself and his younger daughter. Kanaga and her sister alerted one of our staff about this. Knowing the seriousness of the issue, we have kept in touch with her father for over 6 months, advising and guiding him to protect Kanaga as this can potentially lead to trafficking. In almost all the cases, traffickers are known individuals who promise a better life to the victims.

We began educating the girls and their father on trafficking and to spot the signs of trafficking. During conversations on good touch and bad touch, Kanaga opened up about her father’s friend who sexually abusing them. For a child to endure this much at a young age is heart breaking. We have worked to help the sisters find a hostel where they can be safe and secure, receiving all the health attention required.

Engaging Kanaga in conversations on trafficking, good touch and bad touch has saved her life. She is now slowly beginning to return to enjoy the good things in life!